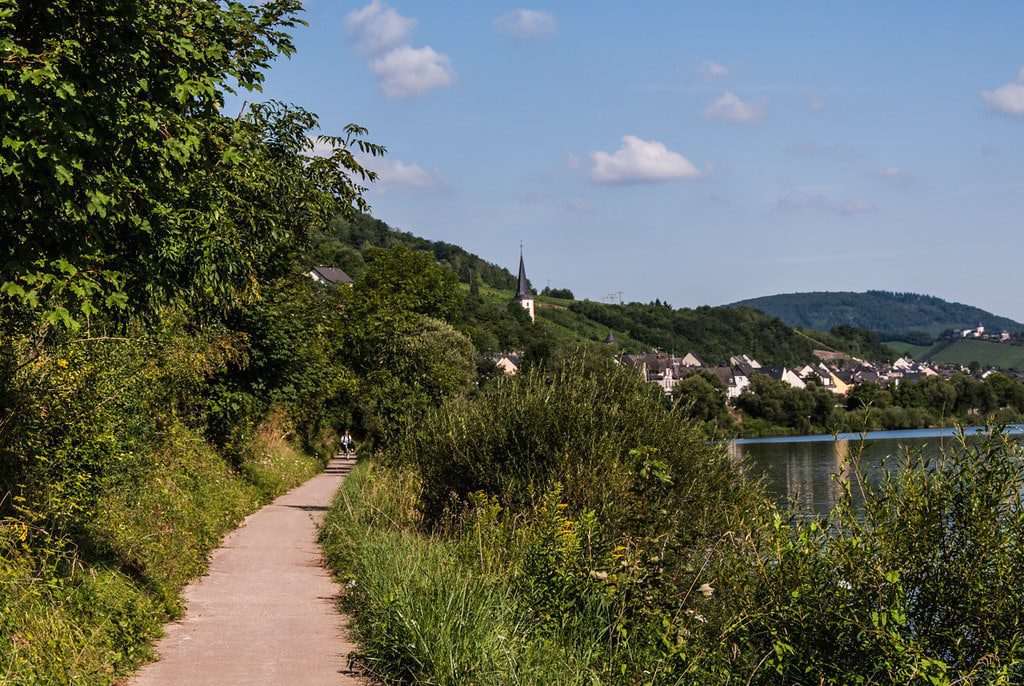 Bike ride along the Moselle and the Rhine

Moselradweg - A bike ride along the Moselle river has long been on the wish list. It was then run in the month of April 2019. How should it just be approached. A car trip to Cologne and then by train from here to Trier. I found a parking space near the bike path (Rheinradweg) on Ampido Parkplatz Sharing which is a portal where individuals and companies can put parking spaces for rent. Our parking lot was in front of a garage door of a private family. Booking train tickets from Cologne to Trier was booked on Bahn.de it was quite easy. We had to buy tickets for bicycles at the train station in Cologne.

Accommodation in Cologne and Trier was booked on Booking.com . The hotel in Cologne was located directly opposite the train station and in Trier inside the city center. From here we were free birds, without appointments and reservations. That's how we like it best, too.

Sunday, April 14, we drove from home with the parking lot in Cologne as the destination. It went with most of the day. The bikes were packed with luggage, the car locked. Now it went on bikes to the hotel approx. 12 km. We arrived at the hotel and parked the bikes in the backyard, where the smoking staff could keep an eye on them 🙂

A walk to the train station to buy tickets for the bikes (you can not buy them online) and then a walk around the cathedral, which we have seen a few times before, but an impressive building. Dinner was a couple of Danes in one of the most miserable neighborhoods in Cologne. When one has seen a man rummaging in the ashtray for shutters. Then you are close to the bottom.

Monday, April 15th. After a good night's sleep we were ready for breakfast, we had not chosen to buy it at the hotel, but instead at one of the many cafes by the train station. Then a nice train ride for a few hours. In Trier we saw the ' black gate ' that the Romans built many years ago. Impressive building. By the way, the city also has an amphitheater , which was also built by the Romans. By the way, it is also in Trier that Karl Marx was born.

The bike ride along the Moselle can take place on both sides. Karen had the bike map from Bikeline and I used gps navigation from Komoot Once in a while we just had to confer, but it is incredibly well signposted See Der Mosel-Radweg.de

Trier - Koblenz
Tuesday, April 16th. After breakfast we cycled out of Trier heading towards the bike route towards Bernkastel approx. 63 km. further north. On the way we stocked up in a supermarket we drove past. After approx. 10 km. we took a coffee break with another morning bitter. We drove along the river with vineyards on both sides. Sometimes we drove through the vineyards. The day ended inWintrich where Karen found a pension shortly after the lock. Directly next to the river and a restaurant as a neighbor. The day ended with quiet rain. Driven 52 km.

Wednesday, April 17th. After a good night's sleep we now continued towards Bernkastel where we found a supermarket where we shopped for lunch. The weather was great we did not have big challenges along the way. We stayed with an elderly couple in a house with several rooms. All with direct views of the river. The wife told that they had tough competition from seniors in motorhomes where they could also bring their dog. The man told that he was previously an active winemaker, but now only grew grapes for his own consumption. He also said that one typically sprays a vineyard 9 times a year. Most times against mold. The dinner was asparagus with potatoes and hollandaise sauce and probably ham (in Germany you always have seasonal ingredients on the menu) Driven approx. 40 km.

Thursday, April 18 Today is Maundy Thursday and thus a public holiday. It could well be difficult to find accommodation for 1 night. Therefore, we decided to take two nights inCell, which is a very touristy city. Of course we would like a view of the river. We pulled the bikes on the road along the river and got a great place to spend the night. A lady who had a shop with a liquor store also rented out 2 apartments. We got the one with amazing Moselblick. We stayed here for two nights. Total price without breakfast 110 €. Nice to have his morning coffee on the balcony with rolls from the local baker. Driven approx. 40 km.

Friday, April 19 A bike-free day with a walk in the city where the Swarze Katze liqueur comes from. Karen had time to read in her book and I was shown a nap in the afternoon. We had dinner at a hotel in the city. Lots of sun, and tourists during the day.

Saturday, April 19 The next big city was Cochem with the beautiful castle high above the city. The weather was amazingly good with lots of sun. Sure a very nice city but we just drove through and continued towards Koblenz. When we came to Treis-Karden, which is located on both sides of the Moselle. Here we would try to find an overnight stay. The first attempt was a hotel, but here everything was busy and the receptionist told that there was probably nothing available in the city. We cycled around a bit until we saw a sign with pension. After a few attempts at the bell, I called the phone number that was on a note by the door. The girl I spoke to said she just wanted to check if there was anything available so we could call again in 30 minutes. We used the wait to get something cold to drink. When we called again, she said we should cycle over the bridge to the other part of town and right next to the church we could find Gasthaus Zur Linde Here was a vacant double room for us. It was easy to find. We got the sweat rinsed off the body and something cold to drink. Here we also ate dinner. Driven 40 km.

Sunday, April 20 The day started with chrome nuts coming around to all guests and wishing a happy Easter and at the same time giving us all a nice box of chocolates. We've never tried that before. Today's goal wasKoblenz, which is where the Moselle river flows into the Rhine and thus the last stretch of the Moselle. The weather was fantastic again, considering the season. We came through a town along the river. Here the horn orchestra in their finest clothes was playing. We found a cozy place to have our lunch. Next stop was in a small town where there was a market. Karen bought a few little things for the grandchildren. While we were sitting and enjoying a cup of coffee, a German couple our age came and asked if they could sit down, which of course they were welcome to do. We got into a conversation and at one point the man asked if they (the Germans) should have a bad conscience about what happened during ww2. My answer was no for those who hated the responsibility were dead after all. Now we continued along the river and during the afternoon we had come to Koblenz. It is known by many for its 37 meter high monument by Kaiser Wilhelm d. 1from 1897. We were right out at the tip of the 'corner' We were there with a true sea of people.

Koblenz - Cologne (Rhines)
Well we agreed to leave the Moselle and start along the Rhine towards Cologne. For the Rhine, Karen used Bikeline card for this A small ferry sailed across the Moselle, but they did not want electric bikes with them. So we had to return to a bridge where we crossed the Moselle. We just wanted to bike until we found a good place. Preferably with a view of the Rhine. We passed an A-power plant and shortly after we found a hotel located right next to the river. Here we were accommodated and shortly after were on in the courtyard with something cold to drink. I asked the chrome nut if the A-power plant was in use. She said it was started up in the 70s and was only in operation for a short period of time. Some geologists found that it was built on an early volcanic subsoil. Driven approx. 75 km.

Monday, April 21 Today we continued along the Rhine towards Cologne. Among other things. we passed iticonic bridge (what's left of it in Remagen. Incredible traffic on the river. There are lots of river barges and tour boats. We had lunch at one of the many restaurants with outdoor dining. As we approached Bonn we passed some very large villas along the river. It was former government offices (1949 for reunification) We stopped at the harbor promenade in Bonn and sat down next to a young man from the local area.I asked him if all government administration had moved to Berlin.He said the Ministry of Justice was still in Bonn.We could see that also what corresponds to Udbetaling Danmark was also here.We reserved a room at the Hotel Kanzeler, which had pictures of all past and present presidents and chancellors in Germany.Drive about 50 km.

Tuesday, April 22 Today we wanted to take a look at Bonn before we drove to Cologne. Bonn is a beautiful city. By the way, also Beethoven's birthplace. We drove on the left side of the Rhine and as we approached Cologne we had to bypass a giant oil refinery. We found the car and had the bikes and luggage loaded again. We chose to drive a western route, along the Dutch border. Driven approx. 45 km.

Tuesday, April 22nd The trip went north along the Dutch border by country roads. There was bustle in agriculture. We stopped at Emsflower , which is the world's largest nursery - impressive! The production is designed so that visitors can walk around the 1st floor and see what is being worked on. Subsequently, we visited their version of the 'plantorama' Gartenwelt . Yes also impressively large. It is a Dutch family that has moved across the border to Germany (Emsland). Now we continued the trip north and found a nice place to stay on Booking.com.

Wednesday, April 23 Today we drove the last bit home after some absolutely amazing days at the Moselle and the Rhine.